Skip to primary navigation Skip to content Skip to footer

We are Windsor River Cruises

Windsor River Cruises, the concept, began late in 2005, shortly after Pride of Windsor Cruises announced that it would cease operations in Windsor, Ontario. It started as a dream to have a locally owned sightseeing and dining vessel big enough to cater to most groups and be docked downtown in the heart of the city, while at the same time small enough to make the operation of the vessel economical and affordable for smaller groups.

This dream came true in 2010 for local businessman John Sheridan with the purchase of the Macassa Bay. After four years of countless vessel surveys, inspections and failed attempts to find a suitable and seaworthy vessel, the Macassa Bay became available, fulfilling John’s dream to bring a tour boat back to the city of Windsor. Windsor River Cruises Limited will operate from April through October of each year and provide a unique, pleasurable, and affordable dining experience by providing unsurpassed professional service and the highest level of food quality. Offering regularly scheduled dining, sightseeing, and special event cruises, the Macassa Bay also offers group rates and private charters suitable for any kind of function.

The Macassa Bay was built in 1986 by Boiler Pump and Marine in Hamilton, Ontario. Named after the Macassa Bay, a small inlet in Burlington Bay, the vessel was originally used as a ferry from Bull Arm, Newfoundland, to the Hibernia Oil Platform in the North Atlantic. The Macassa Bay is a 93-foot, 197-passenger Transport Canada Certified Vessel.

The main deck (salon) offers tables and chairs for 80 passengers, a rear bar and an area for catering services. The galley is equipped with a counter, sinks, cupboards, commercial dishwasher, fridge, and warming oven. Separate washrooms are located on the lower deck via the staircase from the salon. The upper deck allows for an additional 117 passengers (tables and seating for 60), a centrally located bar and a full-length canopy that comes with sides to enclose the upper deck during colder temperatures. 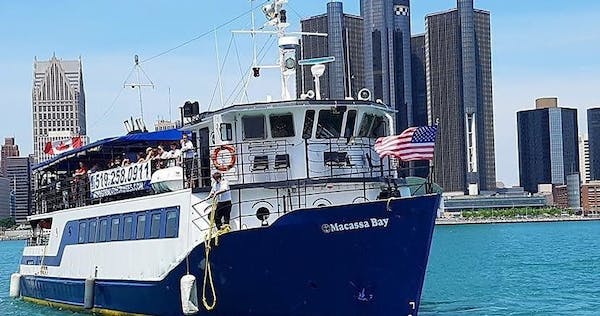